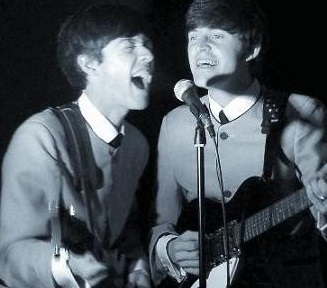 Beatles Tribute – Just John & Paul are just two brothers, Glen and Dean. They are not only passionate about The Beatles, they are immersed in The Art of Entertainment! This isn’t an impersonation….it’s the feel of The Beatles. The excitement; the attitude; the cheeky, flippant confidence, the irreverent humour… Both Glen and Dean are...

Beatles Tribute – Just John & Paul are just two brothers, Glen and Dean. They are not only passionate about The Beatles, they are immersed in The Art of Entertainment!

This isn’t an impersonation….it’s the feel of The Beatles. The excitement; the attitude; the cheeky, flippant confidence, the irreverent humour…

Both Glen and Dean are at home onstage – the chatty, informal style of the in-between song patter and the bold, confident stances…just like Lennon and McCartney!!

And then….there’s THAT SOUND!!! Close your eyes and you’d swear there was a live four-piece band in front of you!

Glen and Dean play and sing note-for-note what John and Paul played onstage and on record.

Dean and Glen, two brothers, both passionate Beatles fans, have been performing as Lennon and McCartney together in various bands since 1995, most notably they formed and fronted the “highly accomplished” tribute The Beetles UK.

…you may have even spotted them on BBC1s “Kilroy” or heard them on various radio programmes!

The live aspect of their show, as you can imagine, they’ve honed to perfection.

They play note-for-note exactly what Lennon and McCartney played on record – Glen, with the trademark Hofner Violin bass guitar, recreating Pauls unique, melodic bass playing style – Dean reincarnating John, providing the solid yet intricate rhythm on the ¾ length Rickenbacker guitar, sometimes even playing the Blues Harp at the same time – when he’s not sending shivers down your spine blending his vocals with Glens!

For even more authenticity, the “fab gear” sound is completed with original 1960’s Vox equipment!

The amps sound right, they look right…and so do the boys…in those Pierre Cardin suits and cuban-heeled boots made to exact specifications!!

Anyone else would be proud of what had been achieved so far in getting the sound so close!

Dean spent 3 months in his purpose built recording studio with a replica of Ringos’ Ludwig drum kit, the guitars that George used – a Gretsch Duojet and 12 string Rickenbacker – and committed to disk the most authentic backing tracks you will ever hear ANYWHERE to further enhance their sound!!

and management company who wanted to jump on the bandwagon of “Beatles through the years” tributes.

Even The Beatles stopped live performances as they could no longer replicate the sound that they wanted onstage…and, sorry, synthesized sounds are no replacement for a 24-piece orchestra!!

Glen and Dean stuck to their guns and it’s paying off!!

They stand alone by doing so – completely unique!

The screams, the raw rock’n’roll, the classic hits, b-sides and album tracks!

It’s a tried and tested formula, bringing back memories to more mature members of the audience…

…and showing the kids what all the fuss was about!! 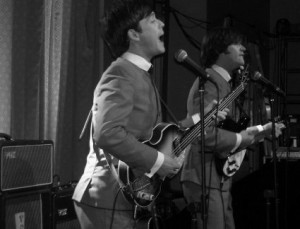