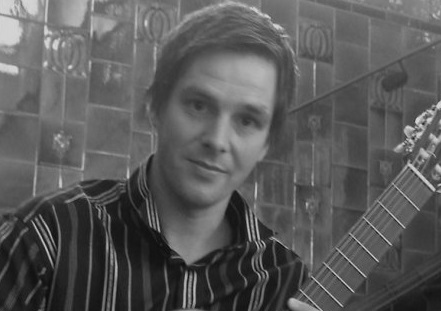 Scott Robertson is an expert Guitarist who excels in Classical Guitar, Spanish Guitar or the Classic Covers.
Romantic music expertly played is perfect for Wedding Receptions, Hotels or Restaurants.

The Acoustic Guitar has an amazingly romantic sound that lies in the background yet sets the mood and atmosphere no other instrument can match.

Scott Robertson is a brilliant young Romantic Classical Guitarist. He is also a seasoned performer with hundreds of hours professional playing to his name. Previous clients include the BBC, Rock FM, Lancashire County Council and 5-star hotels.

Scott has a wide repertoire ranging from classics such as Cavatina – The Deer Hunter, Memories of the Alhambra, Romanza and Bach’s Prelude, through to arrangements of popular music such as Fields of Gold, Here There and Everywhere, Love Story and Kiss from a Rose. 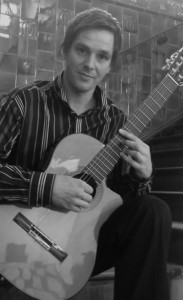 A great big thank you from us both for making our day so special. You really made the atmosphere perfect. I can’t imagine anything else that would have been so lovely! I was very nervous when I reached the doorway into the room for the service, but I calmed down quickly when I heard the you playing. The whole evening was amazing in large part due to the music!

Thank you so much once again.

“He was our musician at many of the BBC Restoration Road shows. He also appeared on local and national BBC television. He is a professional performer with a natural talent for endearing himself to an audience. We’d have no hesitation at all either hiring him for another BBC event or recommending him for any event.”
Liz Catlow, BBC Broadcast Journalist

“Everyone complemented the guitarist who made the atmosphere really special.”
Suzanne Pettigrew, Bletchley Park wedding, Bucks

“The music he helped us choose for our wedding was so appropriate and extremely well presented on the day. He offered an impeccable, reliable service.”
Mr & Mrs Ellel, Stanley House Wedding, Lancs

“He played at our library during a classical guitar recital, as part of the national “Make A Noise” in libraries. The event was extremely successful with a large number of people stopping by to listen to him. He was wonderful in his playing and was open to questions in between performances. He was very professional and built up a good rapport with his audience during the afternoon. We’ve asked him to play again for us next year, for a music therapy event.”
Carol Hoskin, Senior Librarian, Lancashire County Council