Funky Monkey have built up an industry-wide reputation for delivering high-energy, edgy performances in their unique and unparalleled style.

Funky Monkey is widely regarded as one of the best party bands in the UK. They have built up an industry-wide reputation for delivering high-energy, edgy performances in their unique and unparalleled style.

Constantly evolving to ensure they are up to the minute whilst still having one foot firmly in the past. Their on stage antics and ground breaking covers have fuelled many a fun-filled night for holiday makers, families, stag/hen parties, students and on the odd occasion, politicians!!!

Members have played on Top of The Pops, appeared on the X-factor, and performed at the Glastonbury, Reading and T In The Park festivals.

If you are looking for a high quality, professional function or wedding band then look no further folks… the Monkeys promise to make your event a memorable one and you won’t regret letting them loose! 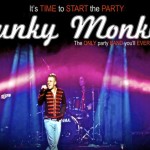 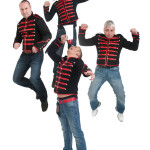 “This is just to say that I have booked the band ‘Funky Monkey’ on numerous occasions at various of our venues at Bunn Leisure, Selsey & they’ve consistently delivered a first class performance. They have a wide range of material covering many genres & Jonnie, the lead vocalist, works extremely hard by interacting with the audience throughout their shows keeping all age groups entertained. I’ve found the band to be polite & courteous to all our staff & technicians & would certainly recommend them to any venue looking for an energetic & entertaining party band. ”
– Adrian Douthwaite (Head Of Entertainment – Bunn Leisure)
“I booked Funky Monkey for The Annual Ley Hill Festival a few years ago, a three day music and Beer festival that attracts around 2,000 per day.
They played an amazing high quality set and warmed up the crowd extremely well. Singer Jonnie Hawkins and the brilliant band had people up dancing very quickly and the professionalism of their set was stunning! Every song was a classic, brilliantly delivered. In short, Funky Monkey are a brilliant, highly talented band who I would advise any venue to book whilst they are available! I have tried to book them for the festival twice since but they have been busy with prior bookings.
Without doubt, a stunning and simply brilliant party band, second to none!”
Rob Sas – Ley Hill Festival
“THE ULTIMATE PARTY BAND. YOU’RE GUARANTEED A FANTASTIC NIGHT!”
Rossko Keniston, Entertainment Manager Park Holidays
Five-piece party band Funky Monkey jumped around to the House of Pain track of the same name. The male and female singers fronting the band give a new meaning to the term energetic lead singer. When an entire band, excluding the drummer, ends up trawling the room while performing a frankly weird amalgam of The Proclaimers 500 miles and Queen’s Bohemian Rhapsody, we as a showcase know instantly to expect even more of the unexpected. ‘Wakey Wakey’ screamed the two singers at their audience. When Funky Monkey is on stage any slumbering audience member would soon be shaken out of their malaise.
– The Stage Review – Big Foot Events Showcase – 2013

“The epitome of a charismatic front-man leads a four piece into party action and the early evening audience of bookers can’t have failed to have been impressed. This is a big sound from what appears to be a recently slimmed down line-up, which seems as fresh and slick as ever.”